When it comes to pitching an important business deal, location is everything. Hosting a client in a city that has the perfect combination of fine dining experiences, five star hotels, beautiful golf courses, and other sought-after amenities can make a real difference in the success of the partnership.

With this in mind, CompareMyJet has researched 38 OECD countries to discover the 10 best and worst cities in the world for business people looking to impress their clients – in the boardroom and beyond. We’ve considered metrics such as the number of business meeting rooms available to hire, number of Michelin recognised restaurants and cost of a taxi.

The 10 best cities for entertaining clients

London comes out on top as the most impressive city to host a client business meeting, reinforcing its reputation as a leading financial centre for international business and commerce. 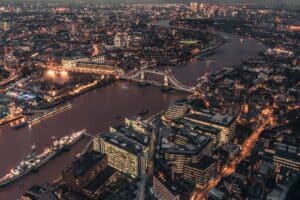 The UK’s capital city boasts 231 business meeting rooms, 129 five star luxury bars and clubs, and 445 prestigious golf courses, making it the perfect location to wine and dine important stakeholders. Treating clients to a night out in London however won’t come cheap. Though London ranks for best city to entertain business clients overall, it has the highest average nightly rate for its five star hotels at £1,091.87 per night.

Other cities in the top five include Paris, which is home to 436 delicious Michelin star restaurants, and Prague – a stylish nightlife hotspot with 115 five star bars and clubs.

The table below shows the top 10 locations to entertain clients in:

On the other end of the scale, Bern in Switzerland sits at the bottom of the table as the worst city for entertaining clients. A 5km taxi journey in the Swiss capital is the most expensive out of every city in our ranking at £24.00. There are also only eight business meeting rooms to choose from and just three five star bars and clubs for evening entertainment.

Reykjavik, Iceland is a marginally better option, with nine business meeting rooms available and five five star rated bars and clubs. However, a night’s stay in a five star hotel in Reykjavik is more expensive than in Bern, costing £470.50 on average, compared to £362.00 in Bern.

Despite its political importance and status in the world business arena, Washington D.C. doesn’t appear in our ranking until past the halfway point, in position 18. The capital has just 36 business meeting rooms and a night’s stay in a five star hotel costs an average of £917.57.

Top 10 US states for entertaining clients

Business people based in the US may prefer to stay stateside when entertaining clients, so we’ve also looked into the best US states to show them a good time.

Minnesota’s state capital Saint Paul ranks number one in the US with the highest number of five star bars and clubs out of all 50 states (81). There are also 154 golf courses to choose from, and the average price of a five star hotel stay is a reasonable $273.01 per night.

Following closely behind is Denver, which has the highest number of business meeting rooms available to book (57), and Atlanta ranks in third place with 202 restaurants deemed suitable for business meetings.

Other cities in the top five include Phoenix, Arizona, which is home to 206 golf courses, and Austin, Texas which offers 144 restaurants suitable for hosting business meetings.

The table below shows the top 10 best US cities to entertain clients in:

If you are looking to impress your clients and build lasting business relationships, consider Compare My Jet to find out the best deals you can get for your private jet needs for whatever destination your work leads you to.

To reveal the best cities for entertaining clients, we created an index ranking 38 OECD countries capital cities around the world based on their amenities, including:

Each city was then ranked and scored to give a final index score out of 10. A separate index was also created for the United States using five of the same metrics (Michelin star restaurants was swapped for number of restaurants suitable for business meetings based on TripAdvisor due to lack of Michelin restaurants across the states.)

Number of business meeting rooms to rent out

Bars and clubs with 5/5 reviews

Number of business meeting rooms to rent out

Previous Post:The Most Popular Luxury Brands Around The World [Mapped]