The Most Popular Luxury Brands Around The World [Mapped]

Coveted by celebrities, socialites, and high-wealth individuals worldwide, luxury designer goods are a status symbol for many.

With 30% of all global luxury sales predicted to take place online by 2025[1], it’s clear that the digital world plays a significant role in the popularity of a label. A solid digital presence can secure brands a position at the very top of the popular list. As a result, online popularity has become a barometer for consumer sentiment toward a brand.

To discover the world’s most popular luxury brands, Compare My Jet has analysed Google search data for hundreds of high-end retailers in all 195 countries, across fashion, cars, jewellery, and hotels. 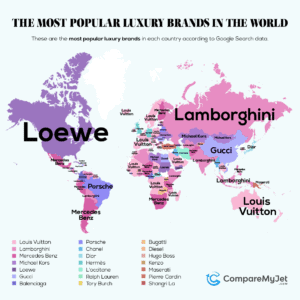 The top 20 most popular luxury brands in the world:

Louis Vuitton is the most popular brand in the world coming out on top in 81 countries, including Switzerland, Ireland, Monaco, and the United Arab Emirates.

The luxury fashion house was founded in 1854 in France’s capital Paris. The label has gone on to become one of the most recognisable brands in the world, famous for its LV monogram.

Luxury car brand Lamborghini ranks as the second most popular luxury brand, holding the top position in 32 countries, including India, Russia, and Ghana.

Following Lamborghini is another high-end automotive manufacturer, Mercedes Benz; Argentina, Finland, and South Africa are just three of the 23 countries where this brand comes out on top.

Loewe rounds up the top five most popular luxury brands, featuring as a favourite in 8 countries such as The US and Canada. With a history dating back to 1846, Loewe’s legacy has extended through the ages, gaining popularity with famous figures such as Ernest Hemingway and Sophia Loren as well as royalty, with Queen Victoria Eugenie of Spain taking a particular interest.

Today, the Spanish fashion label is owned by LVMH, the same parent company of other luxury fashion brands such as Christian Dior, Fendi, Givenchy, and Marc Jacobs – and in 2021 the conglomerate became the most valuable company in Europe, valued at $329 billion.

The most popular luxury brands in Europe 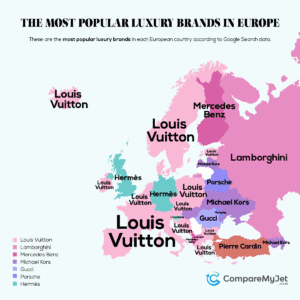 The top eight most popular luxury brands in Europe:

The French fashion house is the most popular brand in 29 European countries, whilst the next most popular is Michael Kors, which only takes the top spot in three countries.

Hermès, L’Occitane, Mercedes Benz, and Porsche follow and are the top brands in two countries each.